Insuring a home today in Florida is becoming an increasing hard objective especially when it comes to older homes.  Broward and Dade county adopted (FBC) Florida Building Code standards in 1994 while the rest of the counties followed suit in 2002.  Most older homes built in Florida were built by (SBC) Standard building code  and do not meet the standards of most insurance companies.   A 4 point inspection qualifies older homes for homeowners insurance.  Today we are going to discuss “Cloth Wiring” and how most inspectors misclassify this common problem especially in South Florida.  So the question is Cloth Wiring insurable for Homeowners Insurance?

Cloth Wiring is considered a fire hazard for most insurance companies due to the  the wiring overheating the cloth and starting a fire. The cloth wiring that most electricians consider dangerous is where the cloth is the only outside barrier to the metal conductor. Cloth wiring considered extremely dangerous and replaced immediately. Most cloth wiring found in houses may not be dangerous. They usually have Romex wrapped around the wire and it would be covered by cloth sheathing.  Below is an example of what is found in most 4 point inspections. 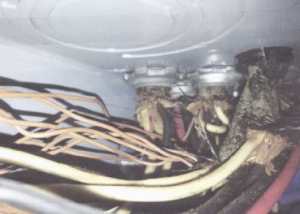 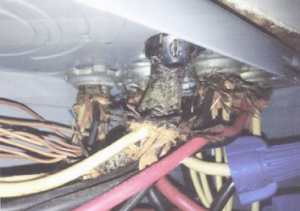 If you have a 4 point inspection and it comes back with cloth wiring. You will need an electrician to inspect the wiring and determine if it is necessary to replace. Most electricians will not see the need to replace the wiring as long as the wiring is covered in romex.

So to answer the question about is cloth wiring insurance for home-owners, the answer is yes by most accounts.  Most insurance companies still will not accept a letter from the electrician deeming the wiring safe,  their is still a limited market that would be able to write the insurance with great coverage.  Always make sure that you call your agent to discuss the requirements and price quotes before proceeding.  If you have any further questions about Cloth wiring insurance please call Florida Statewide Insurance, Inc. at 954-734-7429 for cloth wiring questions or any other insurance you may be interested in.

Adding your 16-year-old to the family car insurance will likely add hundreds, possibly even $1,000 or more, to your auto insurance bill — even if they have a perfect driving record.

A survey out Monday from InsuranceQuotes.com finds that adding a 16-year-old driver to the average married couple’s car insurance nearly doubles (96% increase) the cost. Even as your teen ages, the rate hikes remain high: the average impact of having a 19-year-old on your plan is a rate increase of 60%.

The reason for these extreme rate hikes? Risk. “Teen drivers are some of the most risky drivers on the road,” explains Laura Adams, senior analyst, InsuranceQuotes.com. That’s particularly true of boys: Adding a teen male to your plan increases rates by 92% (compared to an 80% increase on average for 16 – 19 year olds) vs. just 67% for girls, though six states (Hawaii, Massachusetts, Michigan, Montana, North Carolina and Pennsylvania) prohibit insurers from using gender in insurance rate calculations.

Best and worst states for parents with teen drivers

No matter where you live, adding a teen to your plan is likely to add hundreds of dollars to your annual expenses. So we asked experts the best ways for parents to save on car insurance.

Have your teen take a defensive driving course

Purchase policies that include accident and ticket forgiveness

“A new driver with a speeding ticket or an at-fault accident can double your rates,” explains Joshua Lavine, president of Capitol Benefits, LLC in Gaithersburg, Maryland. “For an extra $100 to $200 per year you can save yourself thousands of dollars by preventing huge rate increases after an incident.”

Prove your teen gets good grades

Adams says the many insurers offer a discount — sometimes up to 25% off — for teens who get good grades (usually a B and up) in school; call your insurer to ask how you prove the good grades.

Participate in a program that monitors driving habits

If your teen is a good driver, this can help lower rates. You will get a small device that plugs into your car that monitors how you are driving. “This is also a great way to reinforce safe driving habits with newer drivers,” says Lavine.

“Look at increasing the deductibles on collision coverage up to $1,000 on the cars that are driven by the new driver,” says Lavine. “This is where most of the premium associated with young drivers is and you can often come out ahead with the higher deductibles and lower premiums if you are accident free for a year or more.”

The Balance is a MarketWatch column on the art of juggling family, work and life.

South Florida homeowners, facing steadily rising flood-insurance costs, may be in line for a break, courtesy of the state.

The state legislation is designed to create a competitive, private-insurance market in Florida. Homeowners also could save by choosing to cover as little as the remaining balance of their mortgages.

“This is really an original idea on how free-market insurance should be bought and sold in Florida,” said Sen. Jeff Brandes, R-St. Petersburg. “The two hallmarks of our bill that drive down rates are flexibility in coverage and competition in the marketplace.”

Costs will fall, Brandes said, because homeowners will be able to buy the amount of insurance they can afford, insurers will be taking on less risk and they’ll be competing to write flood policies.

Despite Congress‘ vote Thursday to limit premium increases to 18 percent a year, Brandes says his measure is necessary to bust the federal monopoly on flood insurance and to ensure long-term affordability of policies.

Right now, property owners can buy flood insurance only from the Federal Emergency Management Agency. Its National Flood Insurance Program, facing soaring debt, underwent a major reform in 2012 that was expected to lead to skyrocketing rate increases of as much as 900 percent for some homeowners.
More than 2 million homes in Florida are insured through the federal program. Of those, more than 372,000 are in Broward County, more than 162,000 in Palm Beach and more than 368,000 in Miami-Dade.

Skeptics are doubtful that new insurers would flock to the Florida market and doubt Brandes’ proposal would drive down rates.

“What happens at the state level, it certainly can’t hurt,” Heidrick said. “But the changes in federal law … are really what’s going to make the difference.”

Brandes’ bill (SB 542), poised for a final vote on the Senate floor, would allow homeowners to limit coverage to the remainder of their mortgages.

That’s a sticking point for Rep. Ed Hooper, R-Clearwater, who is sponsoring a bill (HB 879) similar to Brandes’ that calls for more coverage. Hooper said he worries about homeowners unable to afford to rebuild if they suffered a total loss because of flood damage.

“You now have a damaged house sitting on a good street in a nice community with no repair, no chance of being repaired and unable to sell,” Hooper said. “I don’t want to start a process where that could start a decline in a street, or a community, or a beach. Nobody likes an eyesore in their community.”

Even so, insurance companies are not lining up to offer private flood insurance in Florida, said Jeff Grady, president and CEO of the Florida Association of Insurance Agents.

Agents would prefer to “stick with the federal program and continue to make that work,” he said, adding they are supportive of the reforms being made by Congress.

Brandes said, “18 percent is better than 900 percent. But for the long term for Florida, we have to control our own destiny regarding flood insurance.” Over time, even an 18 percent increase would take rates too high, he said.

Despite the differences between the Florida House and Senate bills, Hooper said he’s confident the two chambers will find common ground.

“We’ll figure out how to come to some sort of an agreement,” Hooper said. “I don’t think we’ll leave Tallahassee without some flood insurance legislation sent to the governor’s desk. It’s too important.”